The Toyota Corolla Touring Sports is the estate version of Toyota's practical family hatchback. Jonathan Crouch checks it out.

With their Corolla Touring Sports model, Toyota aims to bring us a compact yet very spacious estate that's a cut or two above the class norm. This version boasts a sharp look, a smart interior and a hi-tech hybrid pair of engines. And it's still very practical, with a decent 598-litre boot. It's a car that's been rehabilitated.

You might well think of the Toyota Corolla as a rather sensible but broadly uninteresting thing. If so, you're a little behind the curve. These were sentiments reasonably applicable to this car's Auris predecessor but its Corolla replacement has quite a bit more attitude. Here, we're looking at the 'Touring Sports' estate body style. This Corolla Touring Sports model succeeded the old Auris Touring Sports estate, which sold between 2012 and 2018 and tried for a younger, more fashionable audience than its hatch stablemate. People who wanted more from their transport than sense and sensibility. It was a worthy effort, but one slightly hobbled by a rather dull interior and unremarkable driving dynamics. Outside of the expensive top petrol/electric hybrid variant, the engine range was a little behind the curve too. 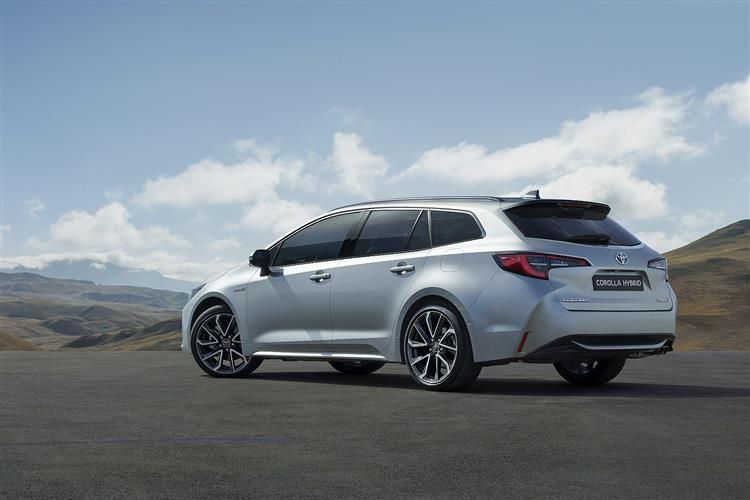 So in 2019, Toyota had another go and continued the Touring Sports theme with its new generation Corolla model. This improved Corolla Touring Sports model is a much more creditable package, offering a sharper look, but the important stuff lies inside and beneath the bonnet in a package that still manages to be one of the more practical choices in its class. Let's check it all out.

This generation Corolla design was the first of the brand's models in Europe to offer customers a choice of two hybrid powertrains - a revised 120bhp 1.8-litre system and a fresh 178bhp 2.0-litre unit that's engineered for more power on demand and more effortless acceleration, without compromising overall fuel and emissions efficiency. As full hybrids, both powertrains have the advantage of offering an all-electric drive capability, with zero emissions and fuel consumption. Both, as you would expect, are also matched to a seamless belt-driven CVT automatic transmission with six speeds.

There are wheel-mounted paddleshifters supplied as part of this transmission package, but it's unlikely that typical buyers will make much use of them. For the record though, the 2.0-litre hybrid variant should get from rest to 62mph in around 8 seconds, which is reasonably rapid by class standards. Expect refinement to be excellent; certainly far better than it would be in a rival rumbly diesel. There are no conventional petrol engine options - and of course, no diesels. At the top of the range, an SUV-style 'TREK' variant has been introduced. It doesn't get any mechanical or ride height changes over the standard versions. 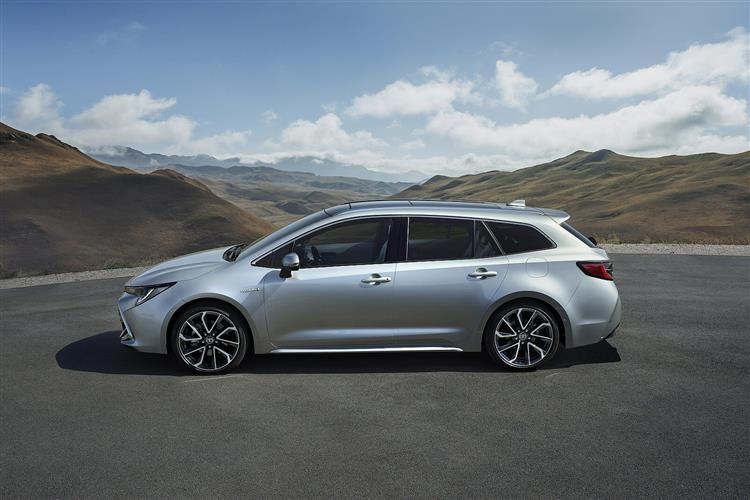 Longer But Still a Looker

This is one of the better looking compact estates. Some of these look a little awkward, with the kind of finished shape that brings to mind a hatchback being squired by a uPVC conservatory. There's nothing like that here. In profile, the 'Touring Sports' model shares its hatchback stablemate's steeply raked windscreen, which flows into an extended roofline with aluminium roof rails and an integral rear spoiler. This station wagon derivative, like the alternative Saloon Corolla body style, sits upon a lengthened 2,700mm wheelbase version of this model's new 'TNGA' 'Toyota New Global Architecture' platform.

Inside, the cabin should feel considerably more up-market than the interior of an Auris Touring Sports model ever was, with better-quality materials along with an 8-inch 'Toyota Touch 2' centre-dash infotainment screen as standard, complete with a DAB tuner and a reversing camera. On most variants, it will feature navigation too. This model's more generous exterior dimensions should be particularly obvious in the rear, though the optional panoramic glass sunroof does eat into headroom. Apparently, it reduces it by 22mm. There's a 598-litre boot in the 1.8 Hybrid variants; in the 2.0 Hybrid, the figure's 581-litres. With the rear bench folded, all derivatives offer 1,591-litres and 1,860mm of load space length. 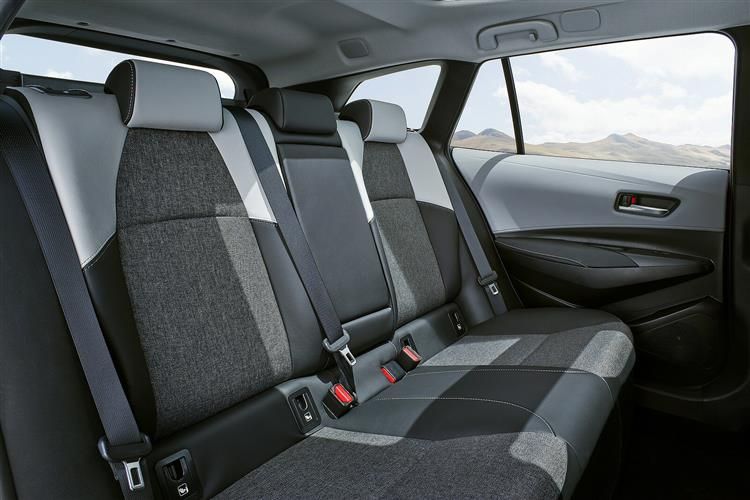 The top SUV-style 'TREK' version has black edging for the front and rear bumpers, silver-finished front and rear under-runs, black wheel arch mouldings and black rocker panels with silver inserts. There's a machined/black contrast design for the 17-inch alloy wheels and TREK badging on the tailgate, plus rear privacy glass, a honeycomb-pattern grille and LED headlights.

There's a £1,270 premium to pay if you want the Touring Sports estate version of this Corolla rather than the standard hatch. That means a price span in the £25,000 to £30,500 bracket - which is par for the course in this segment. There are five trim levels - 'Icon', 'Icon Tech', 'Design', 'Excel' and 'TREK'. All of these spec levels deliver plenty of kit. Even 'Icon' variants deliver 16-inch alloy wheels, heated front seats with lumbar support, automatic LED headlights and dual-zone air conditioning. There's also an 8-inch centre-dash 'Toyota Touch 2' touchscreen, your access point to a DAB tuner, Apple CarPlay and Android Auto smartphone functions and a reversing camera. 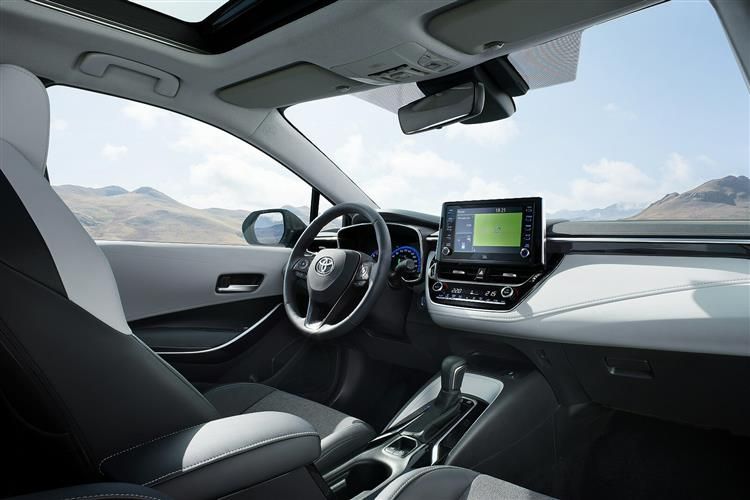 A load of Room to Boot!

Toyota thinks that the vast majority of Corolla Touring Sports buyers are going to like the Hybrid-only engine policy here - and a look at the WLTP efficiency stats reveals why. A typical 1.8-litre Hybrid Corolla Touring Sports on 16-inch wheels manages up to 62.8mpg on the combined cycle and a CO2 reading of up to 101g/km. Bear in mind that these figures rise quite a lot if you fit larger alloys: the 'Trek' variant for instance, on its 17-inch rims, delivers bests of 56.4mpg and 113g/km in 1.8-litre form. 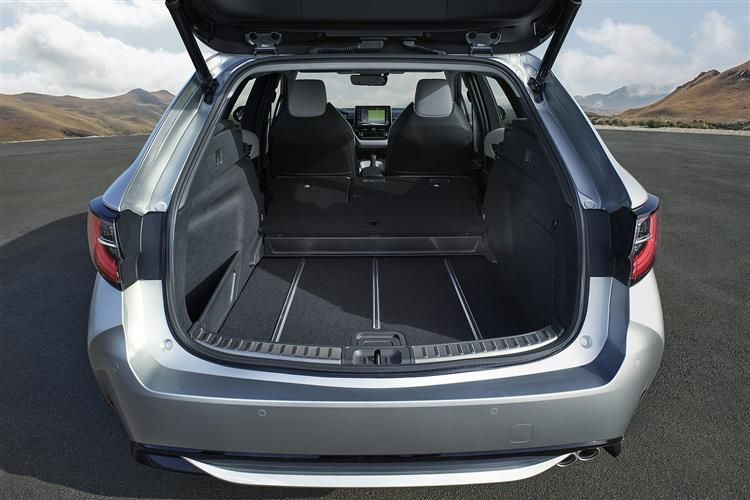 For the 2.0-litre hybrid Touring Sports model, you're looking at a best combined cycle figure of 57.6mpg if you buy in at base spec. Again, with larger rims, those figures rise; this 2.0-litre 'Trek' model manages bests of 53.3mpg and 121g/km. All of these figures will be helped, Toyota expects, by the fact that for typical customers, up to 50% of typical commuting journeys will be accomplished in all-electric drive.

The Japanese maker describes the Corolla's Hybrid technology as being of the 'self-charging' variety, which means that it isn't of the currently popular Plug-in variety. The brand of course has this technology (it's available on top versions of its Prius model) but currently feels it isn't necessary for the Corolla line-up. What else? Insurance groups range between 14E and 15E for the 1.8 and 18E to 21E for the 2.0-litre. Well, the five year 100,000 mile warranty is extremely good and even after that runs out, you'll find that most spares are relatively inexpensive. There's also three years warranty against rust and 12 years of anti-corrosion protection. 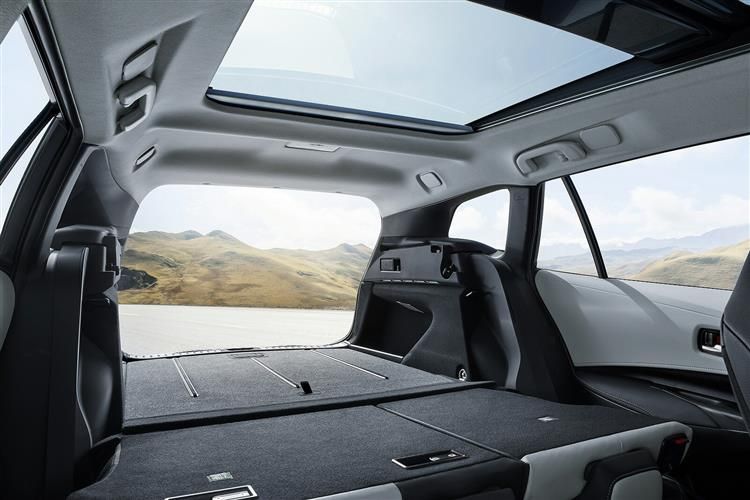 Go see for yourself?

These days, Toyota works to a philosophy called 'Genchi Genbutsu' which, roughly translated from Japanese, means 'go see for yourself'. In other words, in developing its new era models, the Tokyo brand has, more than ever, taken the trouble to speak to owners in order to see how they use their cars in real life. You can see the fruit of that approach in this Touring Sports model. It's a design with a stronger focus on desirability and real-world utility.

In short, this Corolla estate variant has something about it. Okay, so it's not going to have the enthusiast press getting all excited, but here is a car many people would be delighted to have on their drive. Nothing about it suggests you've settled for a life of suburban mediocrity. Sometimes practical is good. Welcome to a surprising new world.