Making Swift Work of the Competition

Suzuki's sixth generation Swift supermini has been improved. But not beyond recognition. Jonathan Crouch reports.

With this improved take on the sixth generation version of their Swift supermini, Suzuki have stayed true to the design principles that have long served them in the small car sector, low running costs, light weight and a spacious cabin being the highlights. The car is now better equipped too, plus its very efficient thanks to enhanced 12V mild hybrid technology.

Buying a car from a budget brand isn't usually something anyone does by choice. But the cost savings over more familiar options are often hard to ignore, especially when it comes to superminis. So what if you could pay budget brand prices, yet get mainstream quality? That's exactly the proposition this little Suzuki Swift has always aimed to serve up. Previous Swift models have certainly been convincing in this way, more than a million of them having been sold in Europe since 2005. 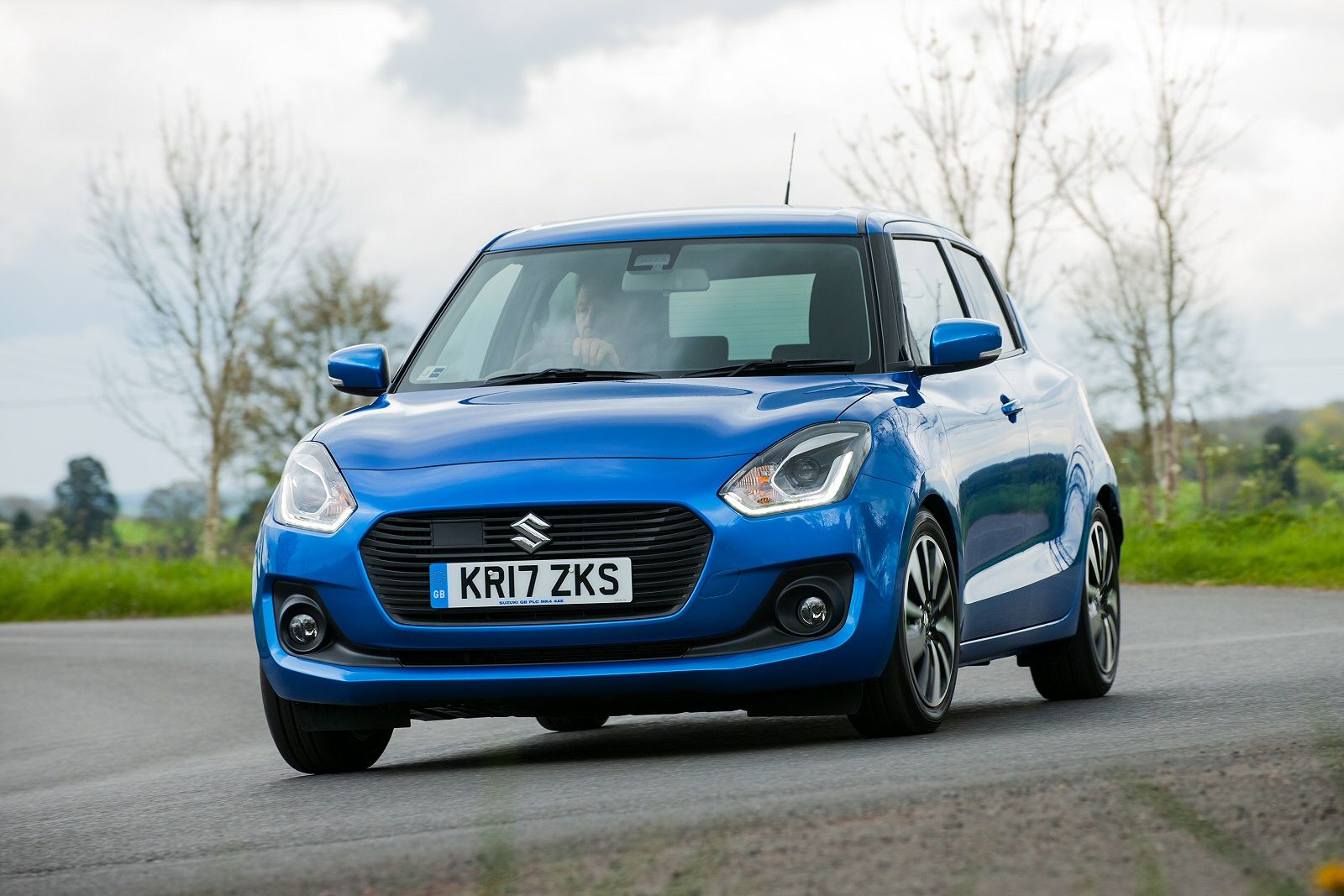 This improved version of the MK6 model benefits from Suzuki's growing understanding of mild hybrid technology. Pair that with this model line's usual light weight and an efficient little supermini seems in prospect.

The Swift has always been quite entertaining to drive, mainly because of its relatively light weight; it still is. Engine-wise, the main change here is that Suzuki has standardised its 1.2-litre Dualjet mild hybrid petrol unit across all mainstream models. This 12V electrified powerplant was available previously, but this is an upgraded 'K12D' version of it, with a new fuel injection system that offers both more powerful response and higher fuel efficiency. This balance is made possible through advances that include an electric intake VVT (variable valve timing), along with a variable displacement oil pump and electric piston cooling jets. 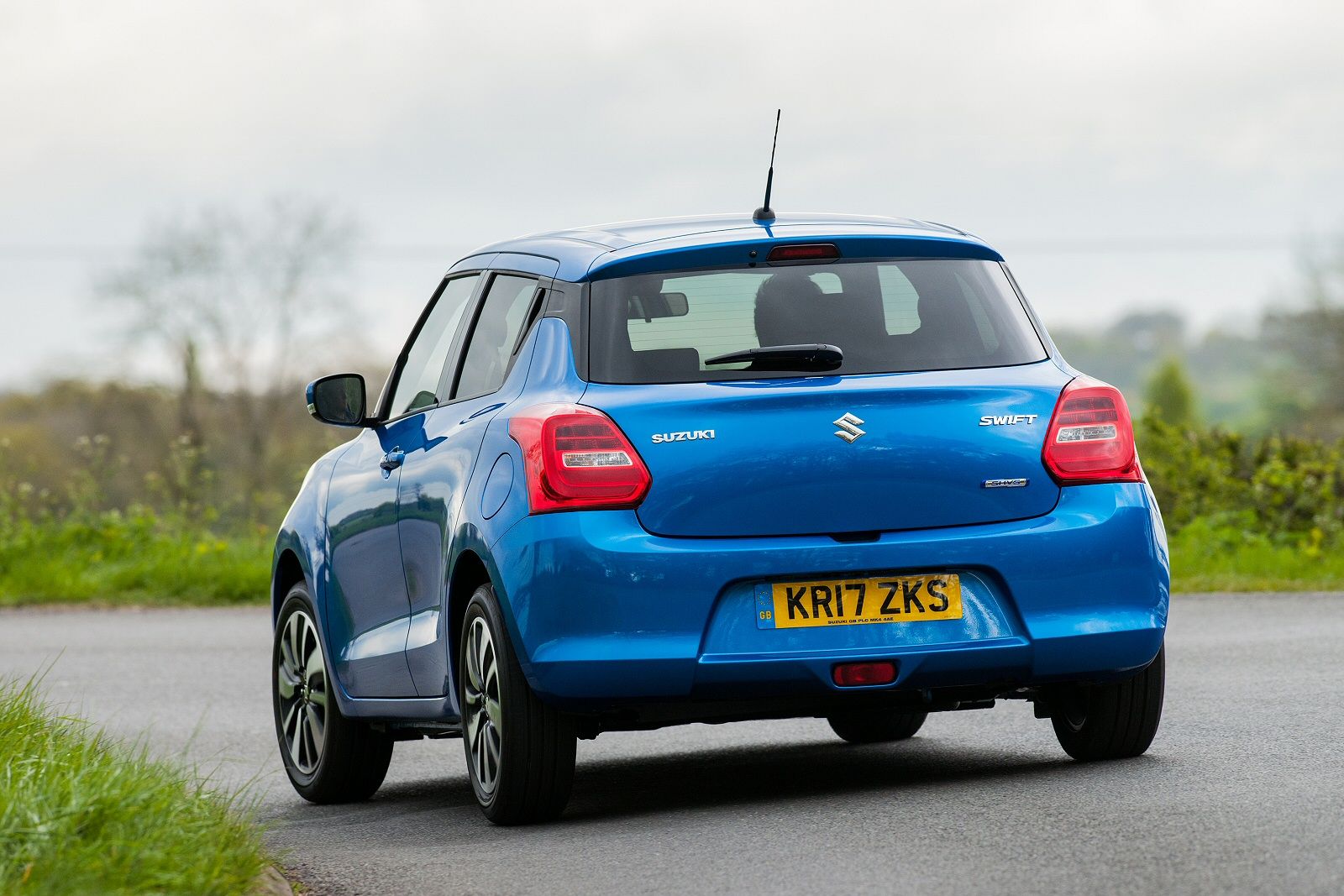 The powerplant's mild hybrid system now features a much bigger lithium-ion battery (increased in size from 3Ah to 10Ah). Engine output is 83PS, with a modest 107Nm of pulling power facilitating a 0-62mph time of 12.2s in the CVT auto variant (you can also have a manual). You have to have a manual if you want the ALLGRIP 4WD variant that continues on at the top of the range; that's a rare thing, a 4WD supermini. At the top of the Swift range, the Swift Sport hot hatch features a 1.4-litre Boosterjet mild hybrid unit with 129PS and a 48V electrified system.

Both the 'SHVS' or 'Smart Hybrid Vehicle by Suzuki' mild hybrid engines work much as before; they can't ever power the car independently by battery (as a full-hybrid model like a Toyota Yaris or a Honda Jazz could), but the battery you do get under the driver's seat helps out in acceleration (around 50Nm of extra torque for up to 30 seconds) and powers the stop/start system. The SHVS set-up harvests kinetic energy when you brake and converts it into electrical energy.

Suzuki hasn't altered the looks of this facelifted model too much, though as usual with a mid-term update, the front grille and headlamps have been re-styled. Blacked-out B-pillars give the roof a 'floating' look and the tail lamps now feature LED illumination on all models. Otherwise, things are much as before with this 5-door-only sixth generation model, which remains compact at just 3,840mm long. Familiar Swift design cues include the wraparound windscreen and the smiley lower air intake. The car remains exceptionally light, just 925kg. 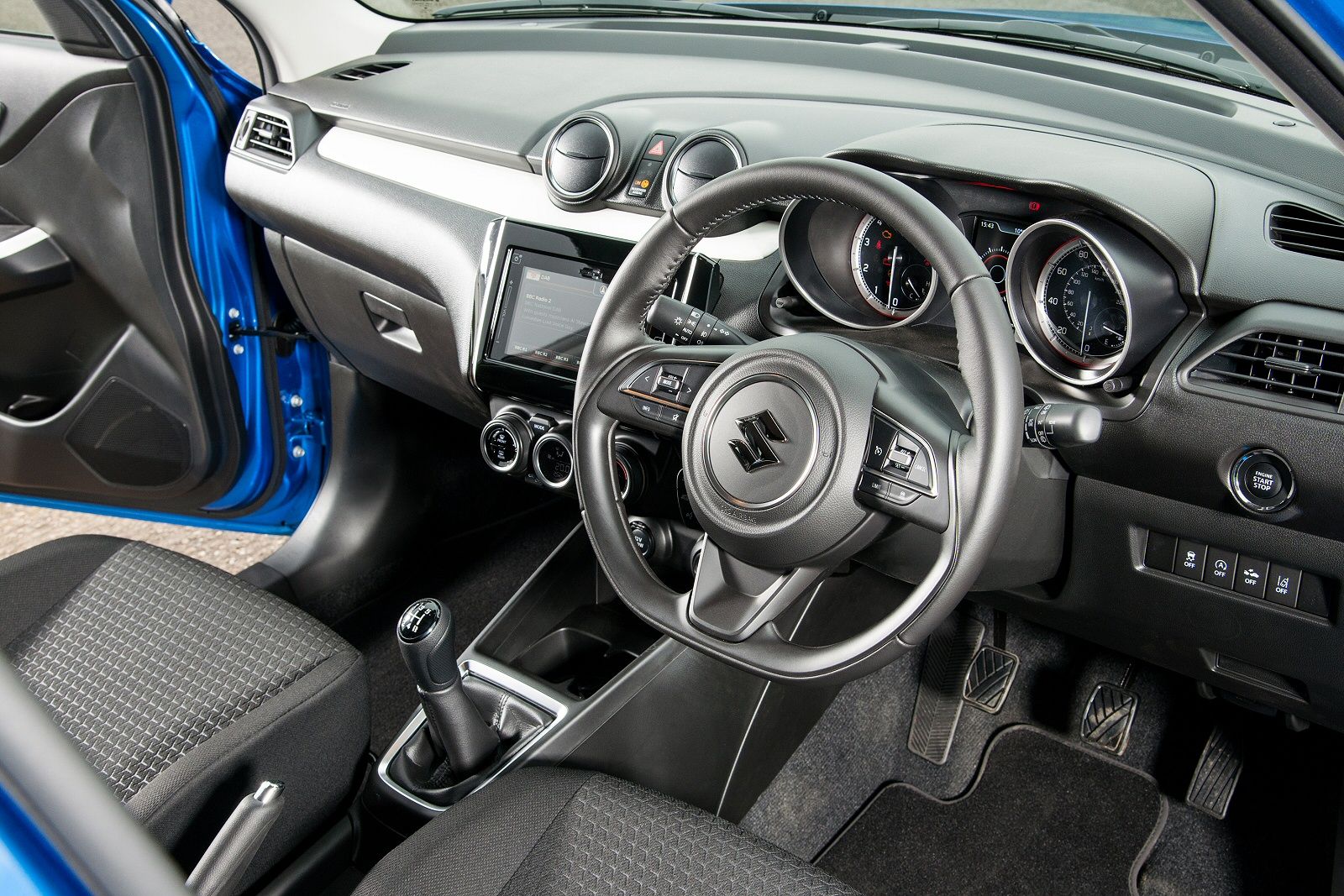 Inside, the cabin hasn't been altered at all - which means you get the same 7-inch centre-dash touchscreen, which has rather dated graphics but includes Apple CarPlay smartphone-mirroring. Apart from making calls it also facilitates receiving directions for optimised traffic conditions, listening to music, accessing email, text messages and more. Cabin storage space isn't that great - the glovebox is notably small - but a relatively long wheelbase delivers more interior space than the exterior dimensions suggest you'll get. Two fully-sized adults will be quite happy in the rear, as will three kids. The boot's bigger than you might expect too, with capacity rated at 265-litres. That's easily enough for a couple of carry-on bags.

Affordability has always been a Swift strength and like so much else, that hasn't changed with the latest car. There's no three-door bodystyle these days and prices start at around £14,800 for the base 'SZ-L' variant. Another £1,500 gets you the mid-range 'SZ-T' derivative and the option of CVT auto transmission. The top 'SZ5' version, which requires a budget of nearly £18,000 can be had with a CVT option or, if you're happy with a stick shift, can be had in 'ALLGRIP' 4x4 form - for around £19,000. The Swift Sport hot hatch with its 1.4-litre 48V mild hybrid Boosterjet engine, costs around £21,500. 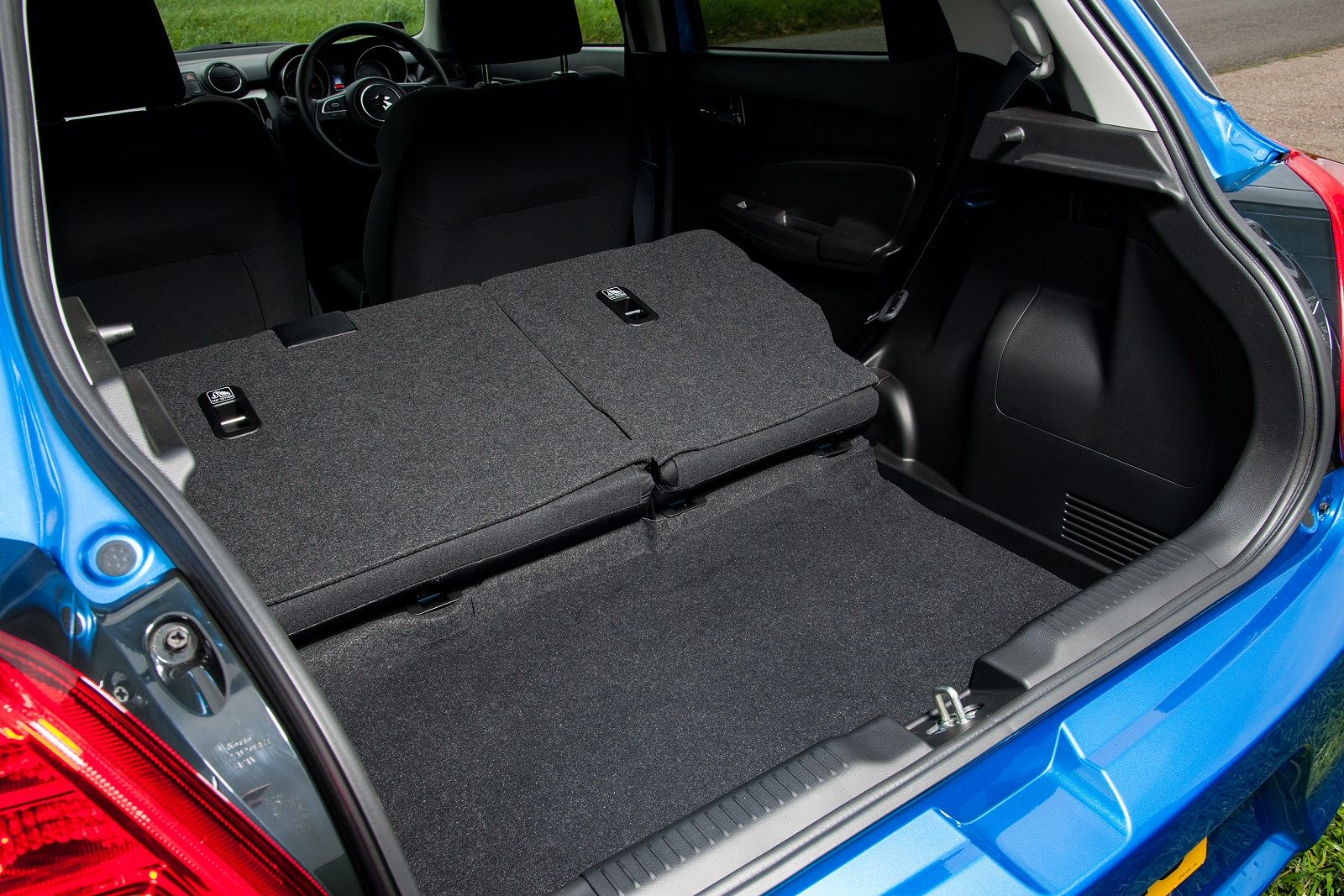 While the Swift has always been cheap to buy and reliable, its fuel economy and CO2 emissions once tended to let the overall cost of ownership down a little, but more recently, that's been no longer the case as Suzuki has got into gear with its mild hybrid engine tech. this improved model's K12D engine improves things further, managing very competitive WLTP readings - 57.2mpg on the combined cycle and 111g/km of CO2. that's with manual transmission. 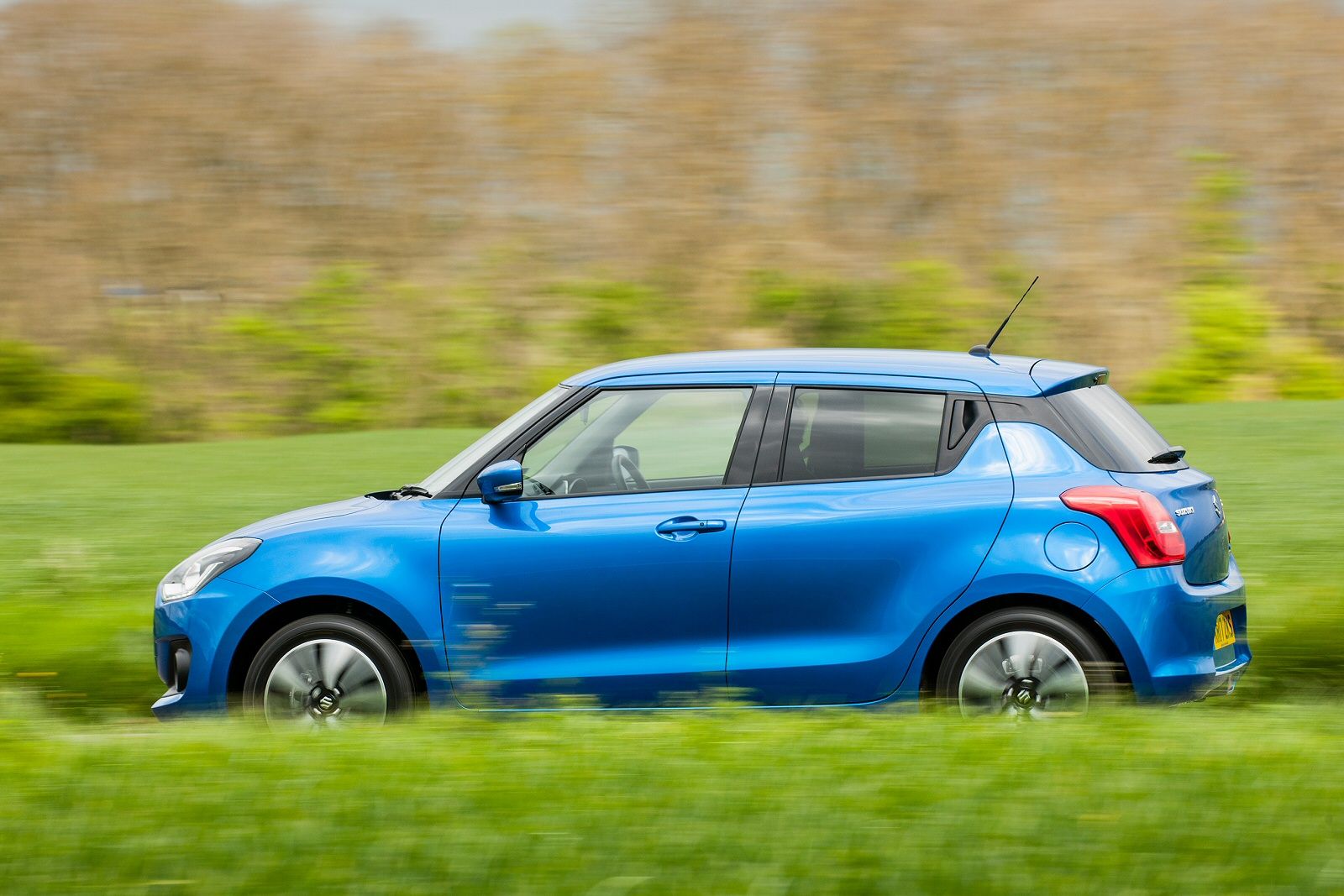 The upgraded 12V Hybrid system that features on mainstream Swift models is a compact and lightweight unit that incorporates an Integrated Starter Generator (known as ISG) which acts as both a generator and starter motor. The ISG is belt driven and assists the engine during vehicle take off and acceleration and also generates electricity through regenerative braking. The ISG unit has a power output of 2.3kW with a torque figure of 50Nm and the components of the system add just 6.2kg to the overall weight of the car.

What about other costs? Well, every version comes with a three-year, 60,000-mile warranty to match most rivals. There's also a year's breakdown cover that extends across the whole of Europe and includes roadside recovery. A 12-year anti-rust guarantee comes with the car too. Service stops are needed every year. Once your Swift has been registered for three years, it will become eligible for Suzuki's fixed price service package which will enable you to get servicing carried out for a single fixed price that will include parts, labour and VAT. There are around 180 Suzuki dealers in the UK and they're noted for excellent customer service. You can also even cut the cost of regular maintenance with a 'Service Payment Plan' that covers you for anything between one and three garage visits. 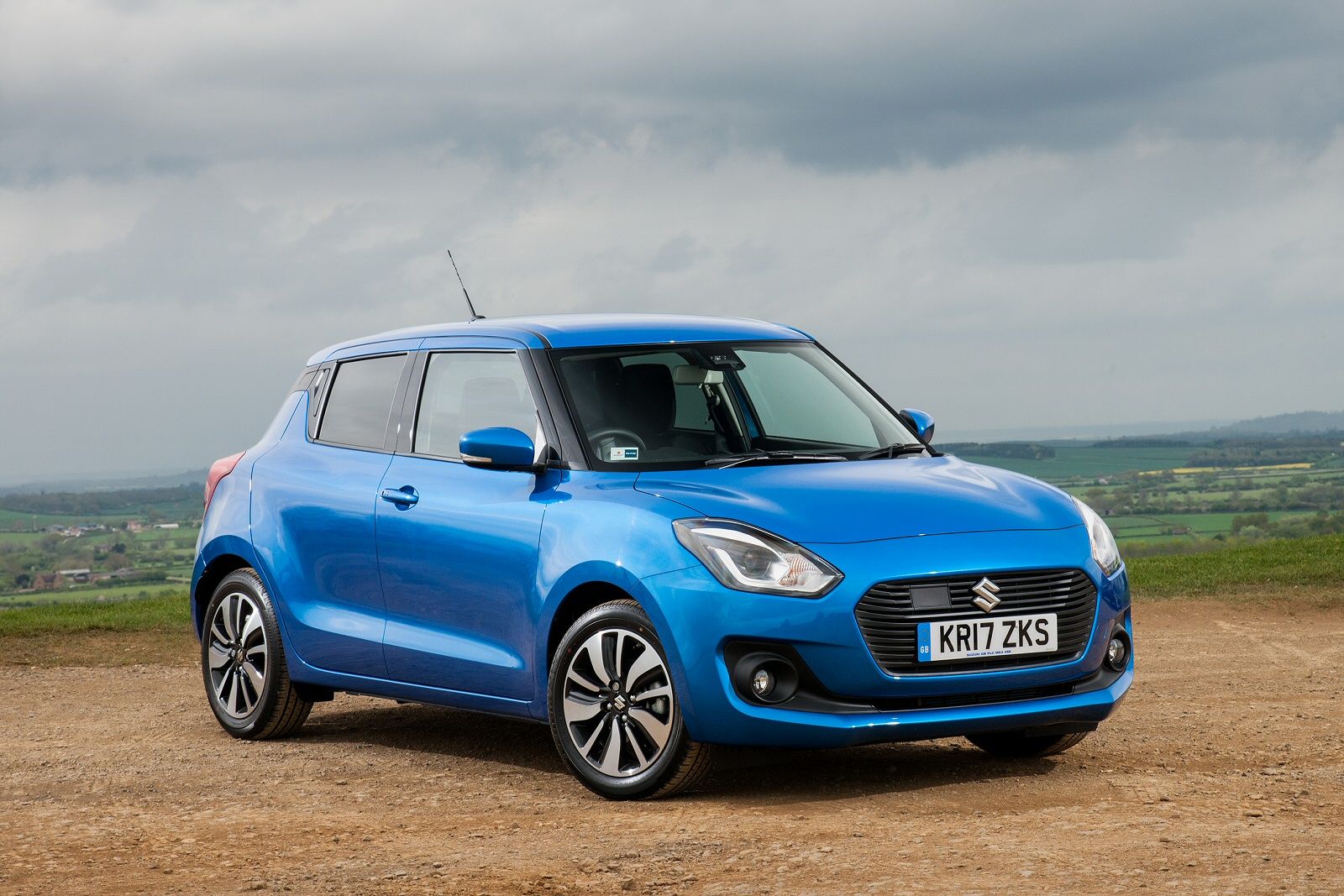 The Swift has always been known as the thinking person's supermini selection - and very little has changed in that regard with this improved version of the sixth generation model. You come away from looking at one thinking that Suzuki deserves a higher profile than it currently enjoys in the UK - but maybe that's the way Swift owners like it.

This isn't a supermini that most of those who'll settle for a Fiesta or a Corsa will ever consider. But it's an alternative they should have tried before signing on the dotted line. Here's an affordable car that doesn't feel like one. And a well kept secret that doesn't deserve to remain that way.