Skoda joins the segment for small, trendy SUVs with this car, the Kamiq. Jonathan Crouch takes a look.

What's this? Another small SUV? You could argue that Skoda had a hand in popularising this concept a decade ago with their Yeti model. Today, we've got the Kamiq, which aims to distil all the Czech brand's best bits into a compact Crossover you could really bond with.

Skoda could have been at the forefront of the current craze for supermini-based SUVs - Juke and Captur-class models. Back in 2009 before either of these two cars, it launched a model you might conceivably remember, the Yeti, which used Fabia bits but dressed them up with Crossover attitude. 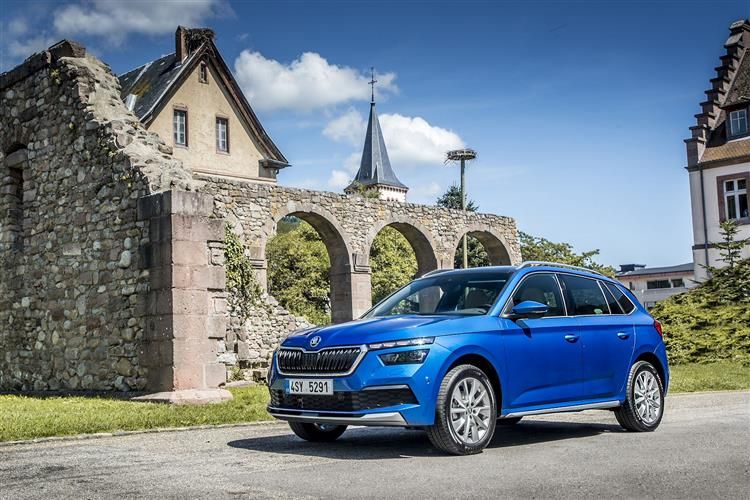 It was a good start, but the foundation wasn't built upon. The facelifted Yeti of 2013 was disappointingly conservative in a market seeking high fashion and after four years on sale, was allowed to drift out of production without being properly replaced. Leaving the Czech brand to wait until it could launch its own version of the small SUV design possible on the VW Group's MQB-A0 platform, a chassis that by Autumn 2019 had been pressed into service for the SEAT Arona and the Volkswagen T-Cross in this class. That was when Skoda was also able to use it to launch this car, the Kamiq.

Because this Kamiq uses the same underpinnings as a Skoda Scala family hatch, it can only have front wheel drive and straightforward torsion bean rear suspension. Still, that's all likely buyers will probably want. As an option, the brand offers 'Sport Chassis Control', which lowers the car by 10mm and gives it two-way adjustable dampers. We can't see many customers taking this up. 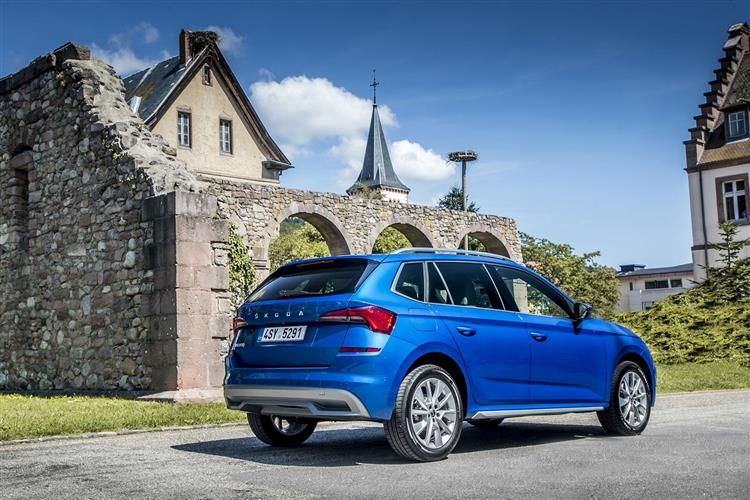 Most customers will want the base 1.0-litre TSI petrol engine. Entry-level versions get it in 95PS form with a 5-speed gearbox but further up the range, the variants available feature this unit in a 115PS state of tune. Go for that and you'll be offered the option of a 7-speed DSG auto gearbox. Both engines have impressive torque available from low revs - the 95PS version delivering 175Nm from just 2,000rpm and the 115PS version serving up its 200Nm across the same 2,000rpm to 3,500rpm band. In other words, you won't have to row this little SUV along with the gear lever through town. Skoda is also offering two other units, a 150PS 1.5 TSI petrol powerplant and a 115PS 1.6 TDI diesel. Don't expect a Kamiq to ride quite as well as a Scala - that taller, heavier body has to tell somewhere - but for the school run and commuting duties it it will work like a charm.

With cars like the Roomster and the Yeti, Skoda used to set itself apart with individualistic design. There's nothing like that here. Instead, the Kamiq looks essentially like a version of one of the brand's larger SUVs - the Karoq and the Kodiaq - that's been somehow shrunk in a hot wash. The separated lighting panel for the dipped headlamp beams sits below rather than above the daytime running light strips flanking the grille. Otherwise, the front end here is very similar to the Skoda Crossover norm, but when they've finally got it right why make big changes? 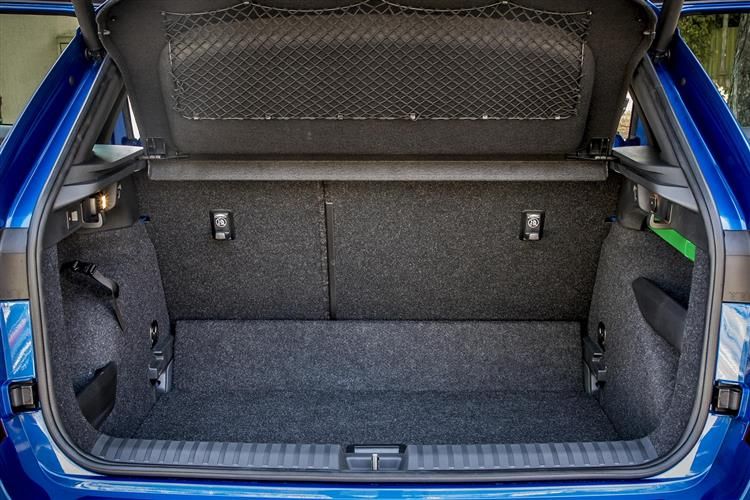 Inside, there's plenty of quality, acres of ergonomic design, little to surprise and nothing to disappoint. Upper-spec models can have digital instrument cluster dials and all get the Czech brand's shiny smart glass-fronted centre-dash screen that sets the class standard for infotainment. Rear legroom isn't of the order you'd find in the kind of Scala or Octavia family hatch model you could buy from Skoda for similar money. But Kamiq customers, who'll typically use this area of the car primarily for ferrying kids to and from school, probably won't care too much about that. The same comment applies to the boot, which measures in at 400-litres, extendable to 1,395-litres when the rear seats are folded.

Expect the Kamiq to sell in the £18,000 to £25,000 bracket, which is fractionally above what you'll pay for volume rivals like Renault's Captur and Nissan's Juke but much the same as you'd have to find for this model's two VW Group cousins, the Volkswagen T-Cross and the SEAT Arona. Kamiq buyers are offered a choice of four trim levels - 'S', 'SE', 'SE L' and 'Monte Carlo'. 'SE' buyers get the chance to pay £800 more to graduate from the entry-level 95PS version of the 1.0 TSI petrol engine to the 115PS variant. Further up the range, you have to have this perkier unit. Providing you avoid base trim and the base 95PS engine, you'll be offered the chance to pay £1,250 more for a 7-speed DSG auto gearbox. 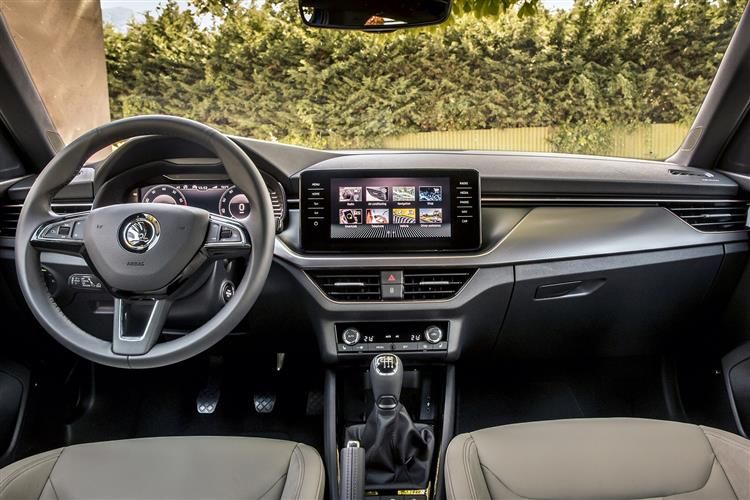 Skoda quotes CO2 figures for the 1.0 TSI petrol engine ranging between 113 and 116g/km - so not too far off what you'd get in a diesel. Expect around just under 50mpg on the WLTP combined cycle. For the 1.6 TDI diesel, you're looking at around 52mpg on the WLTP-rated combined cycle, while for the DSG auto, it's around 50.4mpg. With both transmissions, the CO2 figure is 112g/km. And maintenance? Well, there's the choice between fixed or flexible servicing regimes, depending on whether your annual mileage is short or long. Service intervals are every 18,600 miles or every 24 months. The available 'Skoda Connect' app has a 'Proactive Service' element included which, when activated, can send all the data needed from your car in advance to your local Skoda dealership prior to a service visit. 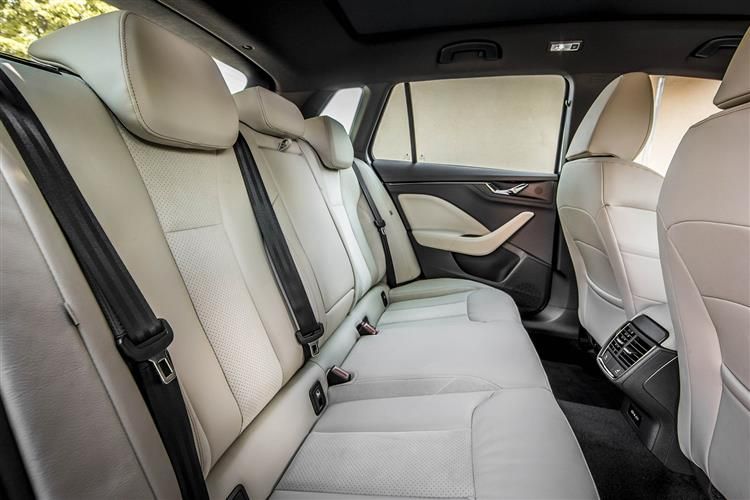 What else? Well your car will come with three years of pan-European Roadside Assistance that has no mileage restriction. The paintwork warranty lasts for three years and, as you'd expect, this model is protected by a 12-year anti-corrosion package. Finally, while it's certainly true that other rivals better the three year 60,000 mile warranty that Skoda provides, you can extend your cover to four or five years by paying extra. Not that you really need to. The brand regularly tops independent consumer satisfaction surveys: according to real people, there are few more satisfying cars to own.

There's nothing very original about the Kamiq, but it's more in tune with the current zeitgeist than the old Yeti was. And certainly more fashionable than the next model up in the Czech maker's SUV model line-up, the rather worthy Kodiaq. Skoda buyers are now well used to re-worked Volkswagen Group engineering with a bit of practical embellishment at a lower price - which is precisely what's served up here. If you're looking for something more outlandish you may want a Nissan Juke instead, but if you want something that has subtle, more 'grown up' looks, its the Kamiq all the way.

Plus the alternatives might actually not be as easy or as pleasing to live with as a Kamiq. You get most of the sensible virtues we like in the Skoda's Scala family hatch, without the rather vanilla blandness of the Scala. A Kamiq, in fact, is without doubt the trendiest car the marque has yet produced. A fashion statement that's also a Skoda. Whoever would have thought it? 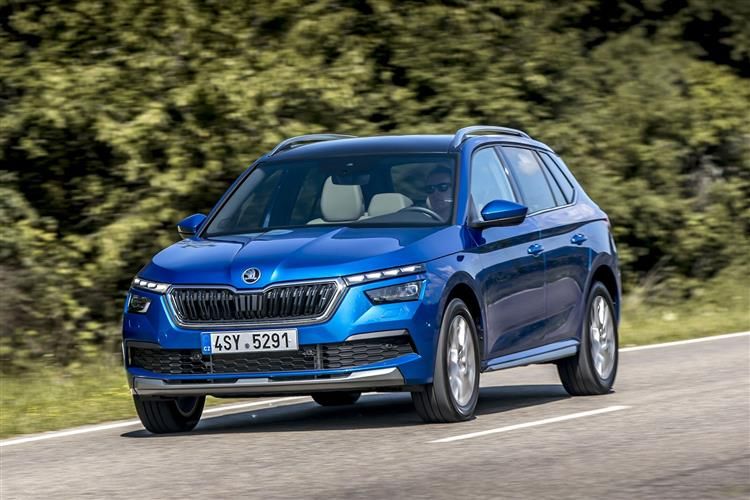